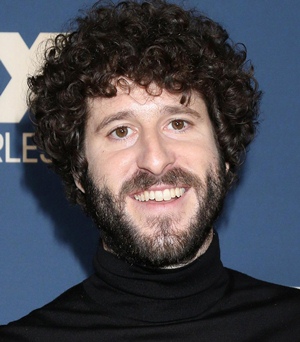 David Andrew Burd is an American comedian and rapper who is widely known by his stage name “Lil Dicky”. Having remained interested in music since childhood, he actually first began pursuing a rap career in order to give a boost to his comedic career. In 2013, he released the music video of the song “Ex-boyfriend” which quickly became viral on the internet and brought him into the limelight for the first time. Two years later, Lil released his debut studio album “Professional Rapper”. Featuring guest appearances from artists like T-Pain, Snoop Dogg, and Brendon Urie, the album generated impressive sales and even peaked over multiple music charts. In 2018, he released the song “Freaky Friday” featuring Chris Brown that was a global hit and got ranked over music charts in multiple countries.

In the following year, he also earned acclaim for his charity music video “Earth” that aimed to raise awareness about the environmental issues. Outside music, Lil Dicky co-created the comedy TV series, Dave, in which he plays the lead role as well. Now as far as his personal life goes, Lil Dicky hasn’t shared any information related to his romantic life but as per reports, he was previously in a relationship with a girl named Molly.