The American model and actress, Ashley Victoria Benson was born on December 18, 1989 to Shennon and Jeff Benson. Raised in Anaheim Hills, Anaheim, California, she started dancing and singing at a very early age. Her career first began as a model at the age of five when she started modeling in dance catalogs and then she began in print advertisements at the age of just eight.

After deciding to pursue career in the field of acting, Ashley Benson first appeared in a number of commercials before making transition into television and films. She initially made minor appearances in few television programs from 2002 to 2004 but then signed a three-year contract with NBC daytime soap opera Days of our Lives and appeared on the show from 2004 to 2007. Benson also made her film debut in the same year with 13 Going on 30. Afterwards, she kept appearing in films and television shows in minor roles until gaining a lead role in 2009 television series Eastwick. Although the series continued for just thirteen episodes but it helped Ashley Benson in gaining a lot of recognition.

The role which made Ashley Benson a global celebrity came in 2010 when she was cast for the role of Hanna Marin in television series Pretty Little Liars. Since then, along with starring in Pretty Little Liars, she has also appeared in several more films and television shows including Spring Breakers, Christmas Cupid, Punk’d, How I Met Your Mother and Family Guy. In her personal life, Ashley Benson briefly dated Ryan Good from 2011 to mid-2013 and has also been linked with her co-stars including Tyler Blackburn, James Franco and Keegan Allen. 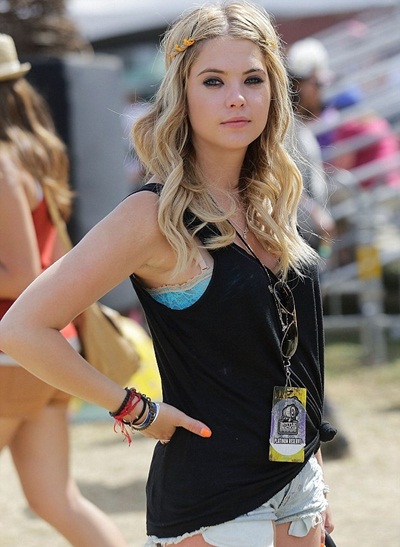 Given below are the complete details about what are the favorite things of Ashley Benson such as perfume, book, color, coffee, food, music, movies, hobbies and makeup products.