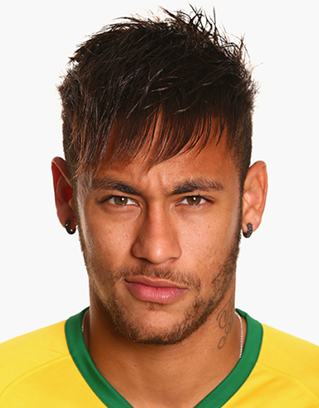 Neymar da Silva Santos Junior is a Brazilian professional football player who currently plays as a forward or winger for the Brazilian national team as well as Spanish club FC Barcelona. After starting his youth career by joining Santos FC in 2003, Neymar made his professional debut in 2009 by making appearance for the senior Santos FC team which was followed by his debut for Brazil U17 team. He made total 103 appearances for Santos FC during 2009 to 2013 before joining FC Barcelona in 2013.

Seeing his impressive club as well as Brazil U20 and U23 football teams performances, Neymar Jr. was included in Brazilian national team in 2010 and since then, has played a key role in the team’s victories. At the moment, he is widely considered to be one of the most talented players in the world and has also been named among the most marketable athletes in the world as well. The footballer is also a proud father of a boy named David Lucca who was born in 2011. The mother of the child is Carolina Dantas but Neymar Jr. is not in a relationship with her anymore.

Given below are complete details about footballer Neymar Jr. body measurements including height, weight, biceps, chest, waist and shoe size.