The American born Australian actress, film producer, and singer, Nicole Mary Kidman was born on June 20, 1967. Her parents David Kidman and Janelle Ann both were from Australia and Nicole Kidman was born when her parents were temporarily living in America on educational visas, therefore, Nicole can claim citizenship in both countries. Kidman developed an interest in acting during her school day and started performing in theatre dramas in her teen.

After being encouraged by director Jane Campion, Nicole Kidman made her acting debut at the age of 16 with 1983 film Bush Christmas. The chart of her popularity began to move upwards rapidly during mid-1980 when she made appearances in several television series and films like Watch the Shadow Dance, Windrider and BMX Bandits. Her performance in 1989 film Dead Calm was very well received and brought Nicole to international recognition. She carried her success streak of 1980’s to the next decade and gave excellent performances in many popular films like Days of Thunder, Flirting and Far and Away.

Since making her acting debut at the age of just 16, the beautiful and talented Australian actress has appeared in numerous films that have grossed over $3 billion till 2013. Some of her most successful and highly acclaimed films are Moulin Rouge!, Eyes Wide Shut, Cold Mountain, Australia, The Interpreter, To Die For and Batman Forever. For her outstanding performances throughout the career, Nicole Kidman has been nominated for numerous awards till now and has won many of them along with receiving a star on the Hollywood Walk of Fame in 2003.

Along with acting, Nicole Kidman has also tried her luck in the field of music and has released a few songs through collaboration with other singers. She has also established her own production company with the name of Blossom Films. Nicole has also worked for various social causes and has been named a Goodwill Ambassador for UNIFEM and UNICEF. In her personal life, Nicole Kidman has been married twice till now. She first married Hollywood actor Tom Cruise in 1990 but unfortunately, the couple announced their divorce in 2001. She then met her current husband, country singer Keith Urban in 2005 and couple got married in 2006. Nicole Kidman gave birth to couples first daughter in 2008 and then the second daughter in 2010. 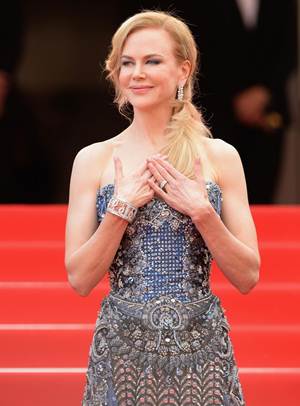