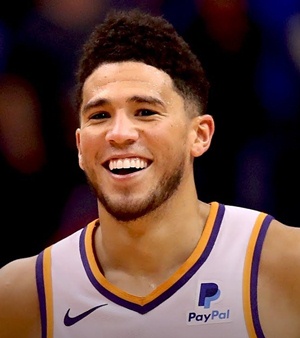 Devin Booker is a National Basketball Association (NBA) star who plays for the Phoenix Suns as a shooting guard. His father’s involvement in basketball led Devin to develop an interest in the sport at a very young age. Having received early training from his father, he continued to groom his skills and mature as a player while playing for the school and then college teams. With a highly decorated amateur career, he entered the 2015 NBA Draft as one of the most sought after players. Meeting the expectation, Booker was picked in the very first round by Phoenix Suns, making him the 13th overall pick of the draft.

Devin debuted for the team in the 2015-16 season and right away grabbed everyone’s attention by showcasing match-winning skills and temperament. Since then, he has played a key role in many of his team’s victories and has accomplished the accolades like NBA All-Rookie First Team, NBA All-Star, and the youngest player ever to score over 60 points in a game. Now lastly coming towards his romantic life status, Devin Booker began dating model Kendall Jenner in 2020 while the pair first confirmed their relationship on Valentine’s Day 2021.