The young rising American soccer player, Alexandra Patricia Morgan was born on July 2, 1989 in Diamond Bar, California to Michael T. Morgan and Pamela S. Commonly known as Alex Morgan, the current forward for United Sates women’s national soccer team and National Women;s Soccer League (NWSL) club Portland Thorns FC started playing soccer at the age of 13 and immediately impressed everyone with her speed, ball control and sprinting abilities. Alex kept her outstanding performance going in coming years and was selected for the United States under-20 women’s national soccer team at the age of just 17. She also finished her collegiate career as the 3rd all-time highest goal scorer while playing for the University of California, Berkeley’s football team Golden Bears despite of missing several games in senior year.

Due to her fabulous college career, Morgan on to be the first pick of the Women’s Professional Soccer Draft, by the Western New York Flash in 2011. She was also the youngest player of U.S. women’s national team which played in 2011 FIFA Women’s World Cup and scored her first goal in the semi-final of the tournament against France.

Because of her fame, many international brands like Coca Cola, Nike and Panasonic have signed endorsement deals with Alex. Along with making appearances in various commercials, she has also been featured in several top magazines including 2012 Sports Illustrated Swimsuit Issue. At the moment, Alex Morgan is engaged to soccer star Servando Carrasco. The couple had met during their college days and became engaged on December 9, 2013. 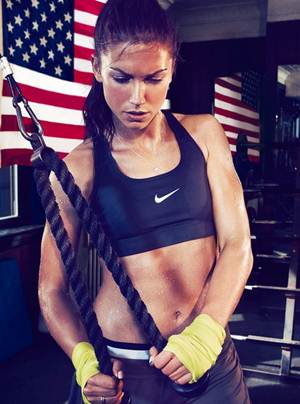