The 57th Annual Grammy Awards 2015 were held at Staples Center in Los Angeles, California on February 8, during which total 83 awards were presented to artists for their fabulous work in various music categories. The ceremony was hosted by rapper LL Cool J who was joined on stage by various guest celebrities for announcing the names of winners and distributing the awards.

The event began with some of the biggest stars of music industry appearing on the red carpet and the excitement and fun kept increasing continuously as the ceremony kept going on. The Grammy Awards 2015 was not only full of surprises when it comes to the winners of awards in various categories but it also included some really amazing performances by various chart topping artists like Beyonce, Katy Perry, Madonna, Rihanna and Pharrell Williams. 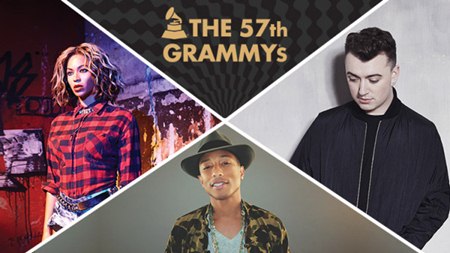 The nominations for each category such as Rock, Classical, Rap, Country, Jazz and Pop music were announced a few weeks prior to the event and the list of highest nominations was being led by Sam Smith, Pharrell Williams and Beyonce, each having nominations in six different categories.

Record Of The Year
Sam Smith, “Stay With Me”

Song Of The Year
Sam Smith, “Stay With Me”

Best Country Solo Performance
Carrie Underwood, “Something In The Water”

So this was all we have related to 57th Grammy Awards 2015 winners till now as the ceremony is to take place yet and the names of winners will be declared during it. That’s why we strongly suggest that you do visit us back after the award ceremony in order to get the complete result with category wise winners list.