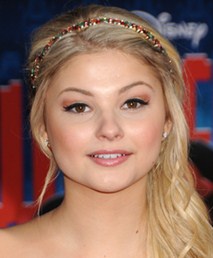 Stefanie Scott is an American singer and actress best known for her performances in films Flipped and Insidious: Chapter 3 along with the television series, A.N.T. Farm. Born on December 6, 1996, the actress made her debut in 2008 with film Beethoven’s Big Break and television series Chuck. Her initial major success came through her performance as Dana Tressler in 2010 film Flipped after which she was cast as one of the main characters, Lexi Reed, in the Disney Channel Original Series, “A.N.T. Farm”. The success of the show proved to be the big-break of Scott’s career and after that she has not only made guest appearances in more TV shows but has also landed roles in well-received films like No Strings Attached and Insidious: Chapter 3. Outside acting, she also has strong interest in music and has released a couple of songs along with the EP, New Girl in Town (2009). While