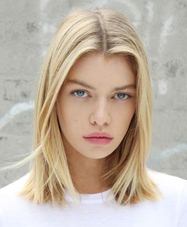 Stella Maxwell is a Northern Irish model best known for her work with Victoria’s Secret Angel. Born on May 15, 1990 in Belgium, Stella spent her childhood in Belgium before moving to Australia at the age of 13 and then finally settling in New Zealand a year later. After staring her professional career as a fashion model, she soon started gaining success and began working with some of the leading fashion brands in the world. During her career, Stella Maxwell has appeared in advertisements and has also walked the runway for March Jacobs, Puma, Urban Outfitters and Alexander McQueen. She walked the Victoria’s Secret Fashion Show during 2014 for the first time and was named as one of the company’s Angels in 2015. In addition to this, Stella Maxwell has also been featured in the editorials of several fashion magazines such as Glamour, Vogue, Interview, i-D and Elle.