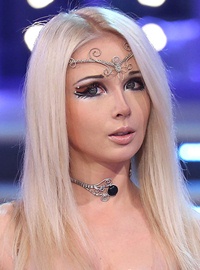 Best known for her resemblance to a Barbie doll, Valeria Lukyanova is a Ukrainian model and entertainer born on August 23, 1985. During her childhood, Valeria had a large collection of dolls which ultimately inspired to become like them. She first rose to prominence by winning the World Wide beauty contest “Miss Diamond Crown of the World” in 2007 after which she posted several of her photos and videos online that earned her a lot of attention because of having a Barbie doll like appearance. Soon people began referring to her as human Barbie and she became an international celebrity in a short time period. During the early days, many people suggested that her pictures are the result of Photoshop and in order to remove this accusation, Lukyanova began posting video of her on the web and also appeared on different TV shows to prove her reality. Despite of surgery claims, Valeria has never accepted to have any other than a breast enhancement operation. In addition to modeling, she has recorded several songs along with two albums and also released a book titled “Astral Travel Amatue” during 2012. While when it comes to her personal life, Valeria Lukyanova is married to her childhood friend Dmitry Shkrabov.