So the big day has finally arrived as the reality television personality Nicole Elizabeth Polizzi, commonly known as Snooki has tied knot with her longtime boyfriend Jionni LaValle. The wedding took place on November 29, 2014 at Saint Rose of Lima Church in East Hanover, New Jersey. Below on this page, we have provided Snooki wedding pictures with her husband along with the bride dress and wedding ring.

On this special day, Snooki wore a traditional lace gown and veil which certainly looked fabulous and gave her a sophisticated and glamorous look. The bride was also wearing pretty earrings and a beautiful bouquet. The wedding was attended by 500 guests and the 27 year old reality star had former Jersey Shore co-stars Jennifer ‘JWoww’ Farley, Sammi Giancola and Deena Cortese as bridesmaids.

Snooki and Jionni had got engaged in March 2012 where the groom gave an engagement ring with 3.02-carat princess-cut diamond in the center of a custom-built band with 2 carats of diamonds around it, having a worth of around $55,000. The couple welcomed their first child, a son on August 2012 while their second child, a daughter was born in September 2014. 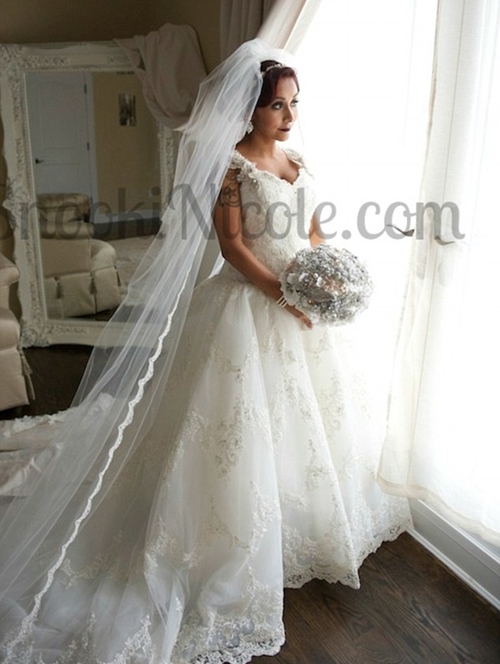 The reception had a Great Gatsby theme along with cigar and scotch bar at the nearby Venetian. The couple reached the church in a white vintage Rolls Royce. So checkout our complete collection of pictures in order to see how things happened on this big day.