One of the biggest names in Tamil film industry, Kailasam Balachander is no more between us. The legendary director passed away in a Private hospital in Chennai on 23rd December, 2014. As per reports, the 84- year old director was suffering from fever and severe urinary tract infection which doctors were unable to control even after a continuous treatment for the last one week.

A hospital spokesperson told media that, “His infection had heightened and his weakness did not help. The fever was under control but there was very little that we could do given his age”. He was declared dead at around 7 p.m on Tuesday. 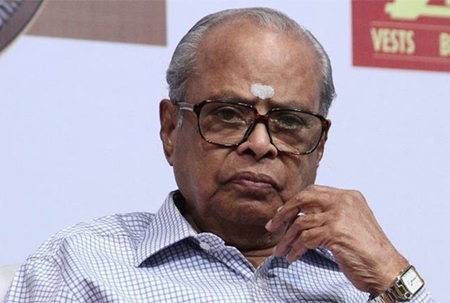 K Balachander career in film industry is spread over 4 decades during which he has made several critically and commercially successful films such as Manmadha Leelai, Moondru Mudichu, Sindhu Bhairavi, Aval Oru Thodar Kathai and Anthuleni Katha. For his fabulous in the industry, he had received 9 National Film Awards and several Filmfare awards along with Padma Shri and Dadasaheb Phalke Award.

Fans and his friends from film industry are really sad since hearing the news and have condoled the death of the director. K Balachander is survived by his wife Rajam Balachander, daughter Pushpa and son Prasanna.